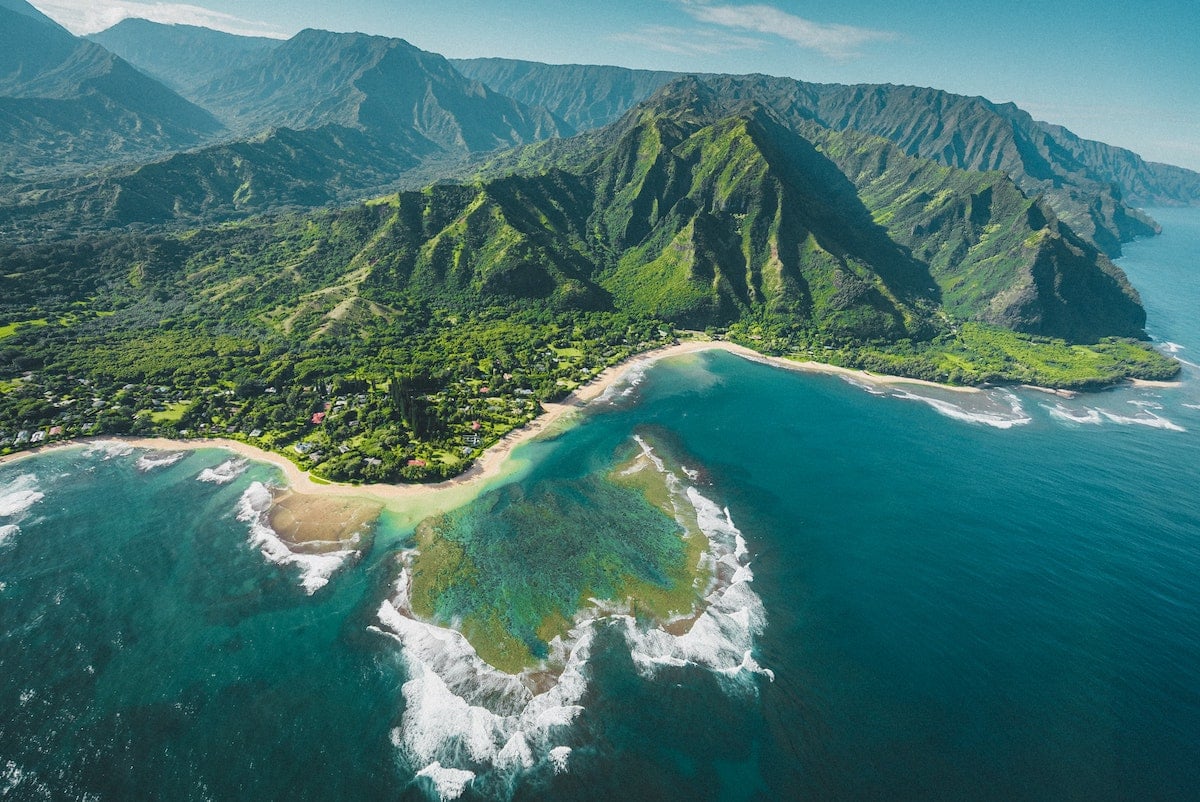 Visiting a tropical island is nothing short of a trip to paradise. Knowing when the best time to visit Hawaii can make a great vacation even better!

Depending on your goals, some months are better than others for great weather, fewer crowds, and finding the cheapest flights and hotels.

It’s a given that summer will have large crowds. Still, there’s more to planning an epic vacation than simply avoiding July and August.

For instance, did you know jellyfish invade south-facing beaches for three days every month? Knowing when this happens can help you avoid getting beached instead of enjoying the surf.

While the best time to visit Hawaii is subjective to your personal goals, there are some factors most vacationers consider when planning vacation time.

Read on and learn the best time for visiting the Aloha State to plan an epic vacation!

Avoid Crowds When You Visit Hawaii

Hawaii is the least crowded during the shoulder seasons. That includes April-May for spring and September-October for fall.

Fewer people on the islands means not waiting in long lines at restaurants.

It also means excursions are less likely to be booked out, rental cars are easier (and less expensive) to find, and snorkel shops will still have rentals available.

Months With the Best Weather in Hawaii

A week in paradise isn’t the same without copious amounts of sunshine, and some months are better for this than others.

March through September see the highest temperatures with the least amount of rain.

Plan your trip during this time for the best chance of spending a warm, cloud-free when you visit Hawaii.

You’ll want to book your stay between November and May. To increase your odds, plan to be in Maui sometime between mid-January and March.

That’s the peak season to go whale watching since thousands of Humpback Whales migrate to Hawaii during this time.

According to the Pacific Whale Foundation, a total of 650 whales were spotted on January 29, 2020, alone. Researchers spotted a whopping 75% of those off the coast of Maui.

For this reason, many people plan their vacations around whale season in Hawaii.

Best Time for Surfing in Hawaii

Surfers worldwide gather in Hawaii each year to catch the big waves. November through February is the season for this.

The North Shore of Oahu hosts some of the top surfing competitions in the world.

If you’re an experienced surfer, there’s no better time for surfing in Hawaii than the winter months.

If you’re not an experienced swimmer, you should know that some shores will be too dangerous.Since the winter months tend to have rougher waves, families will appreciate the calmer waters in the Lagoons at Ko Olina in Oahu.

Cheapest Time to Go to Hawaii

The best time of year to visit Hawaii for some vacationers means scoring the best deals on airfare and hotels. Saving money on flights can mean more money for a luxurious hotel.

Saving money on flights and lodging means more money for planning the best itinerary in Oahu and other Hawaiian islands.

Cheapest Month to Travel to Hawaii

In 2019 Skyscanner reported January and September to be the cheapest times to fly to Hawaii.

Couple that with hotels being at their cheapest between September through early December and September comes out as the winner for both flights and hotels as the least expensive time to travel to Hawaii.

How to Save Money on Flights to Hawaii

According to Hopper.com, a travel-booking platform, you’ll save the most money by booking your flight on a Tuesday or Wednesday.

That refers to do the day you book your ticket. It is no surprise that flying mid-week is also the least expensive time to fly. You’ll avoid the busier weekend flights this way, so you’ll not only save money, you’ll have fewer crowds to fight along the way.

A 2021 survey by CheapAir.com suggests the best time to book is 64 days before your flight. You can also use any top travel site to search and compare the best airfare prices.

Flights to Hawaii can vary by hundreds of dollars depending on what season you plan to travel.

One way to save money on plane tickets is to fly to Hawaii for free using credit card points or airline miles. You can take it a step further and get Southwest Airline’s coveted Companion Pass.

Once you have the Companion Pass, you can fly a friend for free anywhere you fly!

How to Save Money on Hotels in Hawaii

An essential part of planning a trip to Hawaii is finding an affordable hotel in a good location. There are several things to consider, such as whether you’ll be traveling with kids, how important an ocean view is, and of course, your budget.

The Hawaiian Tourism Authority reported that the average daily room rate for 2021 was $225.31, down from $240.92 in 2019. If your trip is less than a week-long, you’ll save money by staying during the week and avoiding weekend rates.

You’ll also pay less for rooms without an ocean view. If you’re willing to walk a few blocks to the beachfront, you’ll save even more. In general, the further away you are from busy tourist areas, the cheaper the hotel will be.

Which Hawaiian Island is the Cheapest?

Oahu is the cheapest island to visit. Part of the reason for this is the abundance of activities and excursions available, all competing for tourism dollars.

Oahu, specifically Honolulu, also has more hotel rooms than any other island in Hawaii. That increases your chance of finding one within your budget.

Is there a wrong time to visit Hawaii? Not necessarily, but if you’re hoping to plan an epic vacation, there are some things to keep in mind.

It’s no surprise that the last two weeks of December, specifically the holiday season, is the most expensive time to visit Hawaii.

Hawaii-Guide.com estimates room rates increase by an average of $100 per night the week between Christmas and New Year’s.

Flights are also double the price during that time compared to September, when flights are typically at their lowest. Airfares also increase during the summer months when kids are out of school and families have time for vacations.

When is Hawaii the Most Crowded?

Hawaii is most crowded during the holiday season and in July and August. Cost isn’t the only reason to avoid summertime and the holidays.

Most people don’t factor in how crowded Hawaii can be when planning their tropical vacation.

Reservations for restaurants can fill up weeks ahead, and booking a luau last minute is almost impossible. Getting tickets to popular events like seeing the sunrise from Haleakala Summit becomes very difficult.

Even the traffic can be a challenge. If driving the Road to Hana is on your schedule, the Christmas season and summertime are the worst times to visit Hawaii.

You’ll find fewer visitors during the shoulder months of April, May, September, and October.

When to Avoid Box Jellyfish Invasions in Oahu

Planning a vacation around a jellyfish invasion may not be a top priority for most vacationers. However, if you’re hoping to spend time on the south shore of Oahu, it should be.

You can expect some beaches to be closed for three days, eight to 10 days after a full moon. Other beaches may not be closed but may have jellyfish warning signs posted.

Maui, Kauai, and the Big Island of Hawaii can also have jellyfish invasions but aren’t typically as bad as Oahu’s.

That is especially important to know if you’ve got your heart set on getting a coveted reservation time for Hanauma Bay on Oahu’s south side.

Southside beaches in Oahu also include Waikiki Beach and Ala Moana Beach Park. You can use Waikiki Aquarium’s box jellyfish calendar to coordinate your visit and avoid the worst time to vacation in Hawaii.

While not widely known, it’s one of the essential travel tips you can get for planning a trip to Hawaii and still enjoying water activities.

Most of Hawaii only experiences two seasons. May through October are “summer” months, and November through April are “winter” months.

With that said, according to Weather.gov, the average annual temperature in Hawaii is between 78° and 85°. That’s plenty warm enough to enjoy your vacation!

Use this travel guide by rssweather.com showing Hawaii weather and rainfall averages to plan your trip to the Hawaiian Islands.

Average Temperature and Rainfall in Oahu:

When is Hurricane Season in Hawaii?

Hurricane season runs from June through November in Hawaii. Although it’s rare for Hawaii to get hit with a hurricane, it does experience four to five tropical storms each year.

Suppose you’re planning a trip during these months. In that case, it’s essential to make reservations you can cancel for a full refund as close to your travel date as possible.

This article was produced by Wealth of Geeks and syndicated by Wealthy Living / Timothy Thomas Limited.