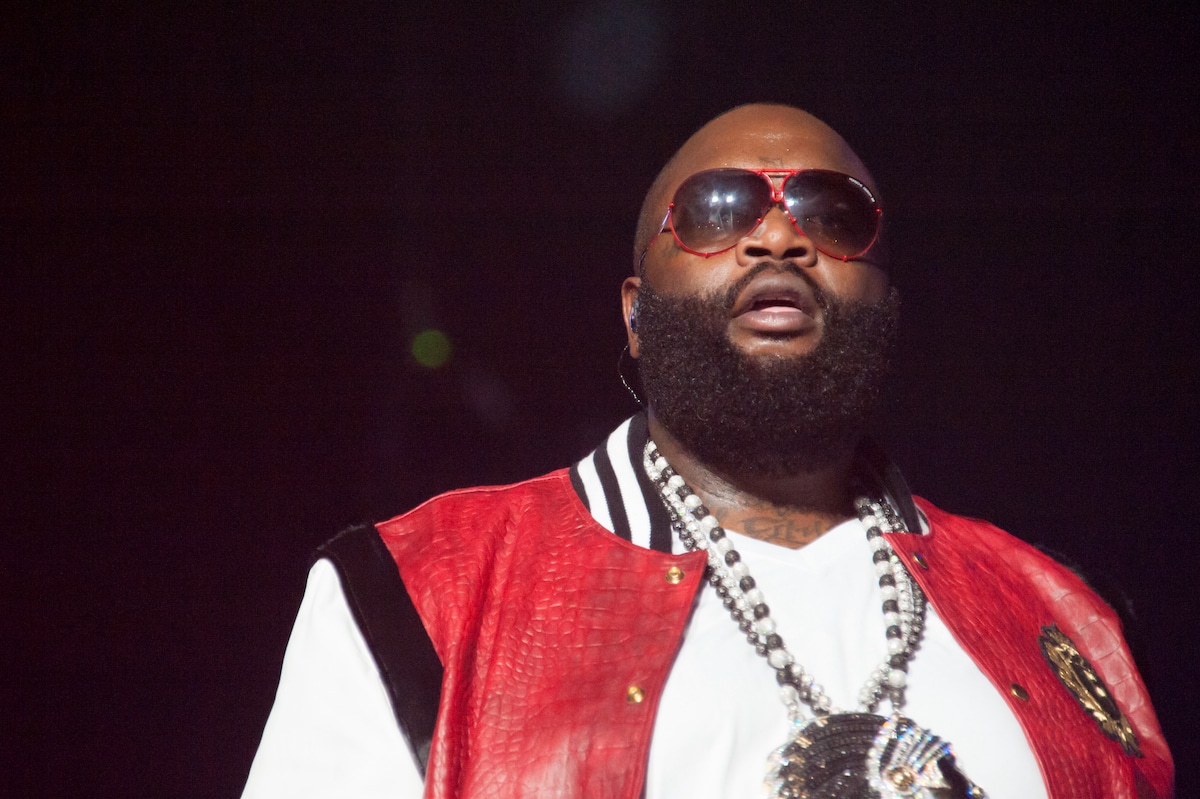 Rick Ross is a Grammy-nominated rapper and producer with a net worth estimated to be around $45 million, with some reports suggesting it could be even higher.

A lot of his work centers around the themes of fortune and money, and he even named one of his children “Billions.”

Although he found fame in the world of music, he has since moved into the world of business and achieved success as an entrepreneur.

His 2021 album “Richer Than I Have Ever Been” says it all, and he’s one of the wealthiest rappers in the world (although he’s got some catching up to do when it comes to the likes of Kanye West and Jay-Z).

Throughout his career, he has made more than $90 million, affording him impressive purchases such as a 190-room mansion in George, which contains a total of 322 acres and 54,000 square feet — making it the biggest property in the state.

Ross started life from humble beginnings. He grew up in Carol City in Florida, a fairly poor area in Miami. From a young age, he felt an affinity with rappers like Tupac Shakur and Ice Cube.

After attending the Miami Carol City Senior High School, he studied at Albany State University on a football scholarship — talk about multi-talented.

It was when he was there that he started writing rap, but before he could make it a full-time career, he spent two years working as a corrections officer between 1995 and 1997 (an ironic past considering his current career, the details of which only emerged later on).

The name Rick Ross emerged thanks to stories the rapper heard about a drug trafficker of the same name; before this, he was known as Teflon Da Don.

Following in the footsteps of his inspirations, he started writing about his experiences watching drug dealing.

His first record was a track with Erick Sermon, but he later got his own record deal with Suave House Records.

After his track “Hustlin’” became a success, Ross went on to get a record label with the much more prominent record label Def Jam Records, and he went on to have a Billboard No. 1 Album with his debut “Port of Miami.”

Other successes followed, such as a Grammy nomination. He has now released a number of albums:

At the prime of his career, he frequently made the list of the world’s top ten highest-paid rappers.

He created his own music label, Maybach Music Group (MMG), in 2009. This was the start of his transition into entrepreneurship. The label has gone on to host the likes of Meek Mill and French Montana.

However, Ross has never stopped releasing music, and has since earned further Grammy nominations, as well as collaborations with some of the biggest names in the game, such as Andre 3000 and Drake.

Despite having children with three different women, he has never been married, although he was engaged to Lira Mercer in 2015.

Perhaps most notably, he had a rivalry with fellow rapper 50 Cent in 2008, which took place over a series of diss tracks but took a serious note when 50 Cent released a sex tape featuring the mother of one of Ross’ children.

This led to a lawsuit that went against 50 Cent and contributed to the rapper’s bankruptcy.

50 Cent also exposed Ross for having a net worth that wasn’t quite as high as he claimed, showing court documents from his child support suggesting financial difficulties.

Ross has also had some legal scandals. In 2010, the “real” Ricky Ross tried to sue the rapper Ross for his stage name, although it never passed through court.

More seriously, he has landed himself in trouble due to charges related to drugs, assault, kidnapping, and weapons — including a stint of house arrest in 2015.

He has also been a victim of crime — he and his girlfriend were almost the victims of a drive-by shooting in 2013 after celebrating his 37th birthday by partying in Fort Lauderdale.

Although both survived without being hurt, they did crash their car while escaping the scene.

One prominent moment in Ross’ life came in 2011, when he had multiple seizures during two flights, resulting in him being unconscious and admitted to hospital.

In 2018, he was allegedly taken to hospital and put on life support (although his family denied his condition’s severity).

Over his career, Ross has been named the Hottest MC in the Game by MTV in 2012 and was named one of the Men of the Year in 2010.

His book “Hurricanes: A Memoir” was released in 2019, which covers his early life, controversies, and some of his most dramatic moments.

In addition to owning his own record label, he’s the owner of various other businesses, including a champagne brand, various restaurants, a shoe company, and beard grooming products.

As for material goods, he has an impressive car collection that includes a Tesla Model 3, a Lamborghini Urus, and a Rolls-Royce Wraith.

Although most of us think Rick Ross’s millions came solely from his singing career, that’s not the case.

Besides his music career, Rick Ross also garnered money from several franchises. One such franchise is Wingstop, a popular fast-food chain in the US.

As if that wasn’t enough of a boost for Wingstop, Rick Ross also gifted his son a Wingstop branch for his birthday last year. Interestingly enough, the rapper claims the gift was his way of showing his son the importance of saving money to start his own business.

Aside from Wingstop, Roberts also owns Rally and Checkers franchises in Miami. These business ventures are sources of passive income for the famous rapper.

Rick Ross had a different goal than his fellow rappers, who stuck with making music. This famous rapper decided he wanted to branch out and try his hand at acting.

Roberts’s acting debut occurred with his appearance as Gregory Dilemma Blickman in The Equalizer, where he played an incarcerated rapper. As a rapper who’s had a few brushes with the law himself, this was the perfect role for Rick Ross.

Besides this role, Rick Ross also made a cameo appearance in Coming 2 America by Eddie Murphy. In fact, his mansion in Georgia was the main set for the film!

In fact, the rapper has invested millions in the company and currently serves as Jetdoc’s adviser, equity partner, and spokesperson. He also regularly appears in various advertising, creative campaigns, and promotional activities.

All those additional efforts have been paying off because the rapper earns profits from his collaboration and investment in the company.

He Invests in the Cannabis Industry

Like many other rappers before (and after) him, Rick Ross also invests in the cannabis space. Ross collaborated with James Lindsay, the CEO of Rap Snacks.

The partnership led to the release of Hemp Hop Smokables, a cannabis line of rolling paper, smokables, and cannabinoid cigarettes.

Not long after the collaboration successfully took off, Rick Ross decided to create his own brand, Freeway! This collaboration with The Cure Company is another source of cannabis revenue.

Besides that, he has his own flower and concentrates company, LA Kingpins.

So, what’s the deal with all these cannabis investments? According to the rapper, cannabis helped him become as prosperous and financially stable as he is today.

He claims not to smoke but is a big fan of edibles for deep sleep and relaxation.

The Rapper Has His Own Crypto

These days millennials can’t seem to get enough of NFTs and cryptocurrencies, and Rick Ross jumped on the bandwagon in 2021 when he launched his first ever NFT, the Porsche 911 art car.

The NFT was a partnership with the famous songwriting duo Cool & Dre, and a celebrity car designer was responsible for the art car.

The car’s design was pretty basic; it consisted of colorful paint splashed on the car’s facade. According to Ross, the abstract design symbolized a difference in cultures worldwide.

Aside from his 190-room mansion in Georgia, you might be surprised to discover Rick Ross had other massive properties.

TMZ revealed during a report in October 2020 that the rapper bought additional 87 acres of land beside the mansion. Now, his total acreage reaches 235.

The year after, Rick Ross bought the Stoudemire’s South Florida mansion through an all-cash deal. The price was a whopping $3.5 million, which the rapper was able to close in just four days!

This real estate purchase was a record-breaker in Florida. It was the fastest deal in the gated community’s history.

To top it all off, Rick Ross also has a mansion in the Seven Isles community owned by the prestigious Fort Lauderdale. His initial purchase cost him $5.175 million, and he decided to resell the property in 2014 for $9.25 million. In 2016, Rick Ross sold the grand mansion for $6.05 million.

While Rick has millions of dollars to spend on luxury, that’s not to say he’s not a generous man. He’s also the founder of Rick Ross Charity Inc, an organization designed to help underprivileged families in Miami. The charity also helps inspire and provide aid to up-and-coming rappers.

Aside from Rick Ross Charity Inc, Roberts also donates to The Urban League of Greater Miami and The Children’s Trust.

While these aren’t money-making means for Rick Ross, they’re certainly ways for him to give back and use his net worth for good.